“Henry: A Polish Swimmer’s True Story of Friendship from Auschwitz to America” by Katrina Shawver

I read the book thanks to the author's courtesy. Thank you!

Krakow was one of the Polish cities that suffered severely from human casualties during the Second World War. When the cities such as Warsaw, Poznan, Bialystok, Gdansk or Elblag were virtually razed to the ground and suffered under the subsequent marches of hostile forces and the long-lasting Nazi occupation, Krakow being the largest and most important city in southern Poland, remained almost untouched. It is possible that this kind of situation resulted from the fact that the Germans wished to provide it some protection because they established the headquarters of the Nazi General Government there. In other words, the city was taken over by the Nazis becoming the capital of a pseudo-state which included the south-eastern half of present-day Poland and the south part of present-day Ukraine. That project was controlled by Hans Frank (1900-1946), who was declared as a war criminal and executed in Nuremberg after the end of the war. He chose Wawel Castle, the ancient seat of the Polish kings, as his first headquarters. So even though Krakow’s architecture was not as badly ruined as for example in Warsaw, the same cannot be said about the culture of the city and its inhabitants.

We must know that at the very beginning of the war, the Germans decided not to divide the city with the Jewish population. It is important to know that before the outbreak of the war, sixty thousand Jews lived in Krakow, which represented a quarter of the entire population. The German occupation of Krakow began on September 6, 1939. At that time, the Nazis liquidated the Jewish social organization and established their own, which was supported to deal with the issue not only of the Cracovian Jews, but also those living in the whole country. It was called the Jewish Council of Elders (in German: Judenrat). In April 1940 the Germans ordered the Jews to leave Krakow within the next four months. At that time thirty-five thousand Jews were evacuated from the city and only fifteen thousand of them remained there. Since that time Krakow became the capital of Poland occupied by the Nazis.

In March 1941, the Germans built a Ghetto in the Podgorze district south of the Vistula River where twenty thousand Jews lived, including Jews coming from surrounding towns. The Ghetto very quickly became a place where people were dying of starvation, and because of overcrowding, fatal diseases were also spread, not to mention the unimaginable brutality of the Germans, who murdered the Jews when they wanted to. Mass deportations from the Ghetto began in June 1942. At that time, five thousand Jews were sent to the death camp in Belzec. Apart from that, in October 1942, another six thousand Jews were also transported to Belzec. During that horrible action the Nazis executed those who were in the hospital and in the nursing home as well as children living in the orphanage. About a few hundred Jews died in the Ghetto. The Ghetto was liquated by Amon Göth (1908-1946), sending people, who were capable of working, to the Nazi camp at Plaszow, murdering others in the streets or in their homes, and sending the rest of them to die at Auschwitz.

At the very beginning of the war, Krakow lost many of its leading thinkers, and it was when the Germans arrested the Jagiellonian University professors. It was November 6, 1939. The professors were sent to German concentration camps. The Poles who remained in Krakow witnessed the change of their city every day. Shops, houses and generally the whole districts were taken over by the Nazis. Even the Cracow Market Square lost its name because it was renamed Adolf Hitler Platz. During the war years, there was distinct resistance of the Cracovians. The Home Army (in Polish: Armia Krajowa) operated in the city. Its soldiers planned an uprising there, which was supposed to be similar to the rebellion that broke out in Warsaw on 1 August, 1944. Eventually, the decision about the uprising was, however, called off, and it happened because the Nazi forces were too large while many young Cracovians, who were able to fight, had been arrested. Apart from that there was the shortage of weapons that could be used during a possible uprising.

It is not without reason that above I mentioned the realities that had occurred in Krakow during the Second World War. I did it because the protagonist of the unusual biography by American journalist Katrina Shawver was associated just with Krakow. He was born there, grew up there and next he was arrested by the Germans, and then was locked up in a prison located on Montelupich Street. Originally this place served as a military barracks, and was located in a building that had belonged to the family of the Italian merchants and bankers called Montelupi since 16th century. In 1905 the Austrian authorities decided that there would be a military court which had formerly been located in Wawel Castle. Then the court was turned into a prison. During the Second World War, there was a Nazi police prison in this building under the control of the Gestapo. Between 1940 and 1944 there were about fifty thousand prisoners.

It can be assumed that the life of Henry Zguda (1917-2003) promised to be really great. He was a great swimmer and water polo player, and he also knew foreign languages. If the war had not broken out, perhaps his life would have been different. In 1942 he was arrested by the Germans and imprisoned in the aforementioned prison on Montelupich Street. Then he was taken to Auschwitz and next he was sent to the Nazi concentration camp in Buchenwald, which operated since July 1937 until the end of the war. Henry Zguda was also in the German camp in Flossenbürg. He also experienced a dramatic death march, finally reaching Dachau where he was liberated at the end of the war. His life in post-war communist Poland was not easy either. The new authorities began mass persecution which also affected Henry. Eventually he managed to emigrate to America where he married the love of his life and died in 2003 at the age of 86. However, he never forgot about swimming. For him the emigration to the United States was a sort of escape from a world that was no longer the same as Henry had known before the war. You have to remember that it would not have been possible for him to do it unless he had had his friends he could count on at any time.

Katrina Shawver’s book is an extraordinary account of the man who survived despite the enormous cruelty that was present in the Nazi concentration camps. While writing, the author took care of every detail. On the pages of this book a reader meets Henry who was a really unusual man. In addition there is so tragic story that you can be almost sure that there is no return to a normal life from that hell. In a very interesting way Katrina Shawver reveals the fate of Henry Zguda, and the whole book is enriched by numerous photographs. The biography is based on interviews with Henry Zguda between 2002 and 2003. It was just before his death. I think that some invisible force had to direct that Katrina Shawver could meet Henry to be able to write down his memories, which are a true tribute to all people who survived that terrible war and to its mortal victims. This kind of books should be published as much as possible, but unfortunately every year it is getting harder because the eyewitnesses of those events are less and less.

On the pages of the book we learn not only the events that took place in Henry Zguda’s life but also we can read how emotionally the author approached them. Therefore, there are also her observations and remarks. In addition a reader also learn what Poland had looked like prior to the war before Adolf Hitler (1889-1945) decided to destroy not only the country but first of all the people living in it. The book's hero is a really beautiful character regardless of what part of his life his story is about. Very often Henry mentions an extraordinary inner strength that helped him survive the worst moments of his life. Some people may be surprised by the fact that despite the ubiquitous terror he never complained about his fate, although it does mean that he accepted it. It is possible that it resulted from his immense desire to live. I am sure that it was just his willingness to live that gave Henry the strength to survive each day. In my opinion Henry’s story, although very tragic, gives us hope and uplift.

There are many people in the world who do not really know much about the cruelty of the Second World War. They do not fully understand what the Holocaust was about. Therefore, this book can be a great source of information for them filling the gaps in their historical knowledge. I have no words to express my emotions after reading this book. For my part, I can only be grateful to the author that she decided to undertake such a difficult subject. For Poles, it is very important people around the world learn about the great drama we experienced when on September 1, 1939, Nazi Germany invaded Poland. But that's not all, because several days later (September 17) the Soviet Union, headed by Jozef Stalin (1878-1953), did the same. Therefore, I recommend Katrina Shawver’s book to anyone who wants to know the extraordinary story of the man who survived hell, and even so he never gave up and lost his faith in people.

If you want to read this review in Polish, please click here.

Posted by Agnieszka at 1:09 pm 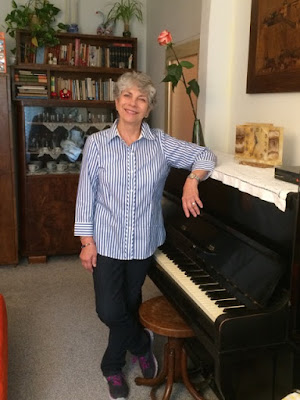